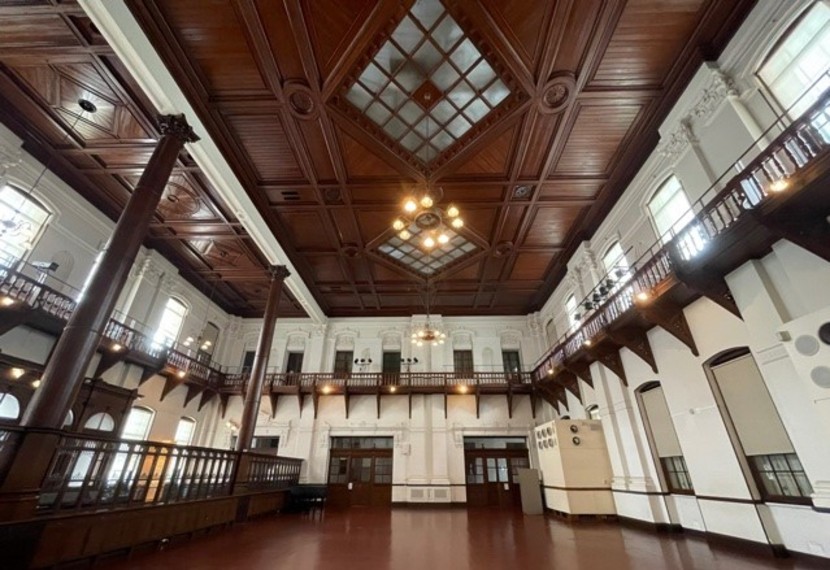 After a break to rest and recharge at the Inoda coffee shop, let's continue our walk along Sanjo Street seeing the signs of Kyoto's modernization. 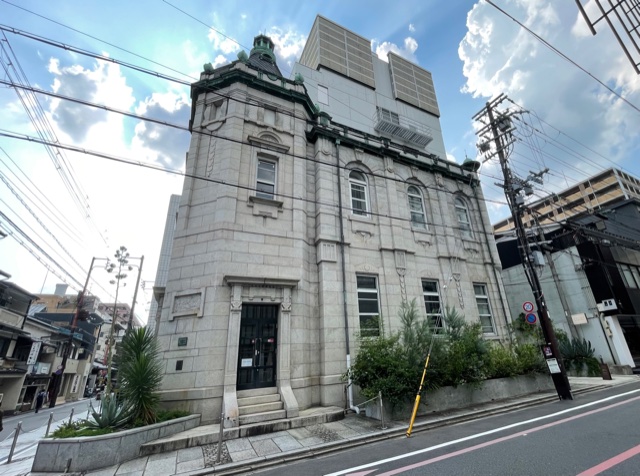 A building formerly known as the Kyoto branch of Nippon Life Insurance Company stands on the next corner next to the Inoda coffee shop.
The establishment looks modern covered with white stone tiles and it was designed by a renowned architect, Kingo Tatsuno and was completed in 1914.
There used to be a second-hand Kimono shop on the ground floor but they went out of business during the Corona outbreak and you cannot enter the building at the moment.
Just behind, there is a showcase hotel, TSUGU Kyoto Sanjo which opened in 2019. 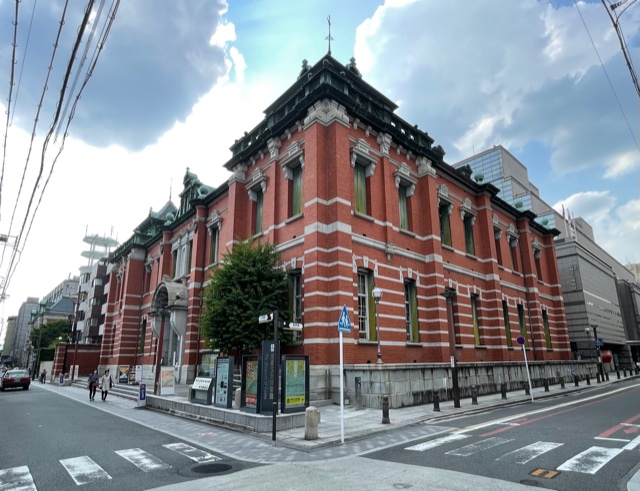 Heading further west, next thing that catches your attention is the Kyoto Cultural Foundation.
It is housed in the former building of Kyoto branch of the bank of Japan which was completed in 1906. The design with stripes of white granite alternating with red brick walls and dormer windows is similar to the design of Tokyo Station. It was a popular style in Edwardian England and is called the Tatsuno style in Japan. 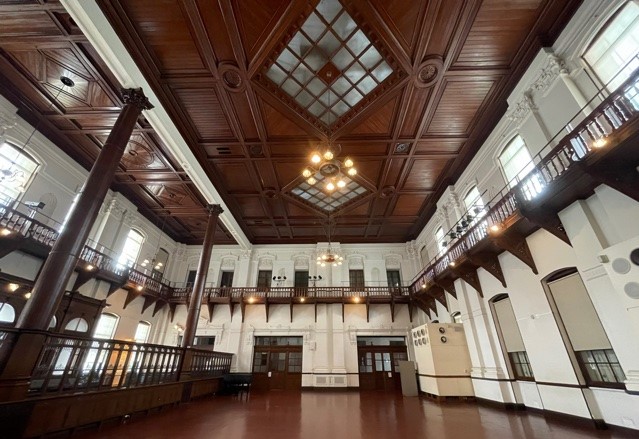 Let's go inside and take a look around the interior.
There is a huge counter still there just as it was when the building was a bank. You can imagine bank staff at working busily on the other side of the counter.
Now the floor is used to display special exhibition. 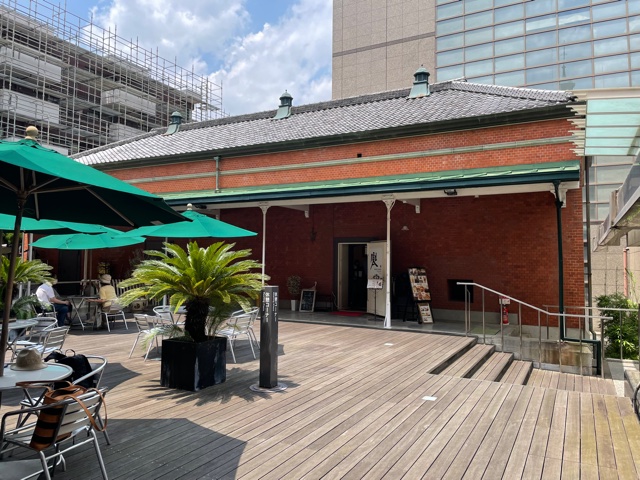 Going through the hall between some rooms which used to be bank offices and you pass a courtyard and you will find a Maeda Coffee shop behind the museum.
The bank vault was renovated for the café. The café is quiet with a nice and relaxing atmosphere. The heavy door at the entrance brings you back to the time when this was the most secure area in a bank. 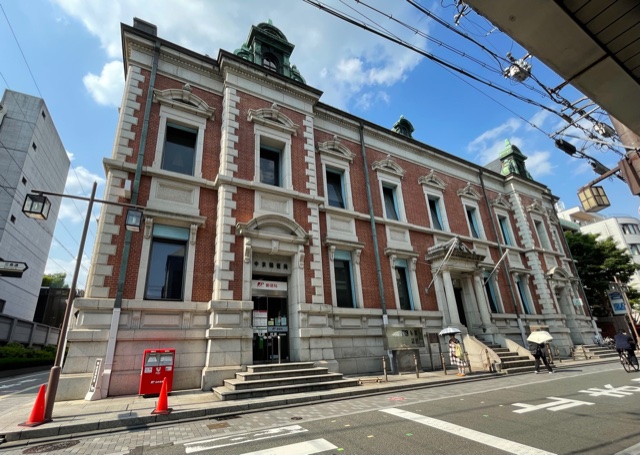 Back on the street and the next building you can see on the north side is Nakagyo district Post Office. The construction was designed by Mr. Shigenori Yoshii who had spent time abroad in London as an official of the Japanese Finance Ministry.

The building was completed in 1902 and but in 1973 the city goverment decided to demolish it however group of local people petitioned the goverment for its preservation.
In 1976 the building's façade was restored while the interior was extensively modernized.
This was a way to preserve the building historical value while keeping its functionality.

The rebuilding of Nakagyo district Post Office was the first of this type of modernization in Japan. You can see old pictures and articles about the original building inside the post office. 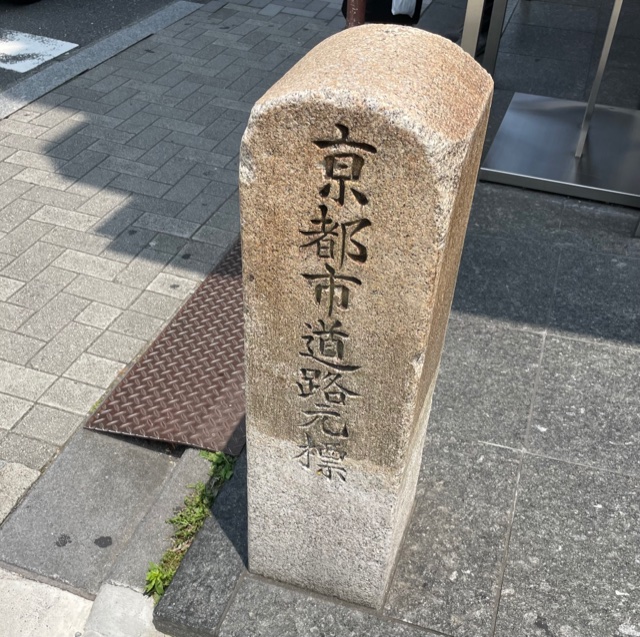 Walking further the west, you will hit Karasuma Street. There is a stone marker at the south east corner of the Karasuma-Sanjo intersection indicating the original point of measuring distance between cities. 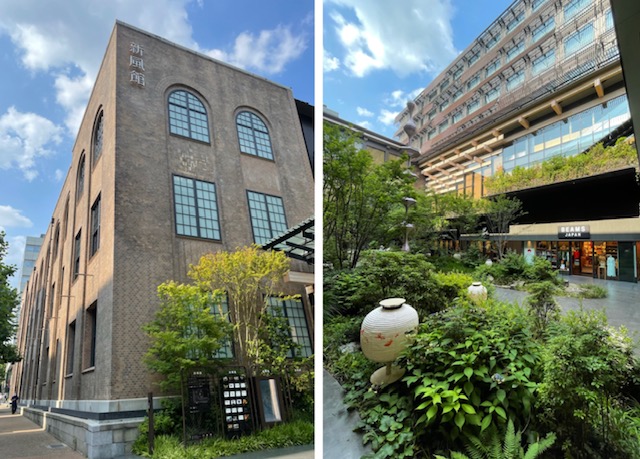 At the south east corner of the Karasuma-Sanjo intersection, the former Central Telephone Office, built in 1926 stands. Now it is Ace Hotel and ShinPuhKan building.

In 2016, the Shinpuhkan, a popular dating spot and meeting place for young people, was closed much to the disappointment of the public the building however was not torn down but extensively renovated retaining the familiar front part of the establishment and reopened last year. There are lots of shops inside, including a small theater and café and it is again a popular to get together has been. 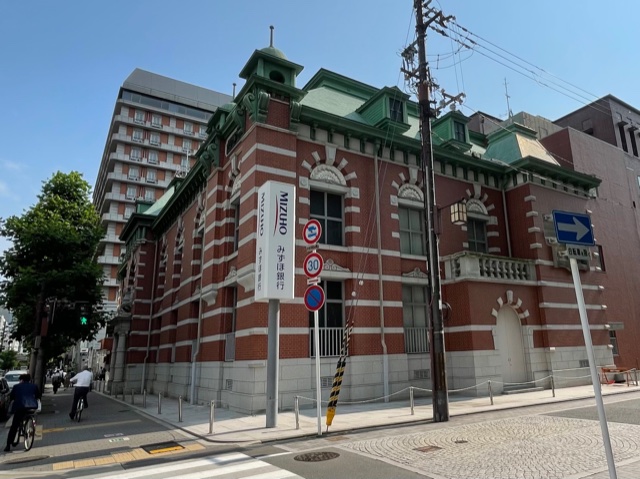 On Karasuma Street facing south, Mizuho Bank Kyoto Chuo Branch stands on your right. The building is used to be the Daiichi Kangyo Banks Kyoto Branch.
Mr. Kingo Tatsuno designed the original building and it is now a replica built in 2003. Before it was rebuilt, the architectural Institute of Japan submitted a written request to the mayor of Kyoto and the bank to preserve the building as it had historical value, however the request was rejected.

To the south of the Mizuho Bank on Karasuma Street, Hotel Monterey Kyoto welcomes guests from around the world. The establishment opened in 2007 and the design is reminiscent of the Arts and Crafts Movements period in late 19th century England. The café and interior feature lovely classical designs and hotel staff is cheerful and helpful. 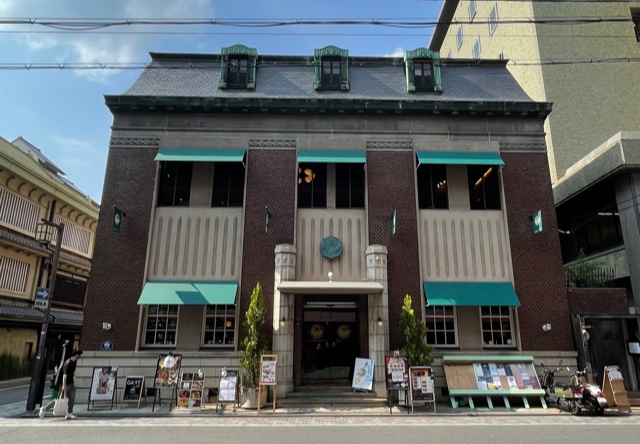 Back to Sanjo Street and you will pass the Starbucks Coffee, the next building you can see on your right is the former Nishimura Trading company headquaters and now known as the Fumitsubaki building.
The establishment is a two-story wooden building completed in 1920 and it was renovated and rented out to shops and other businesses in 2004. The name Fumitsubaki which means camellia is a perfect name of the establishment as its décor features the tasteful brend of dark red tiles and deep green awnings. 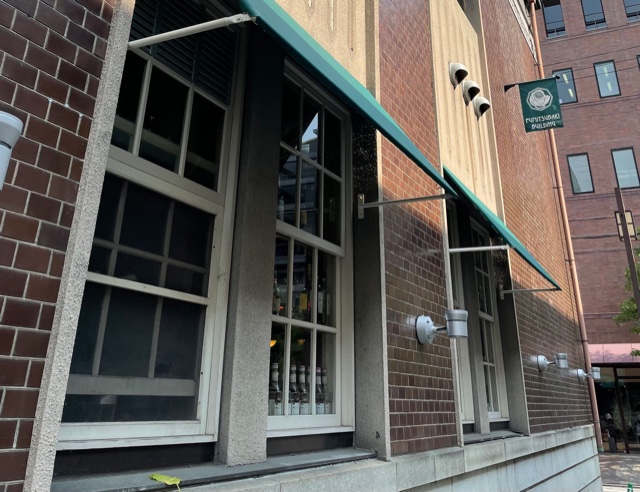 We have seen lots of buildings during our short strolls along Sanjo Street. In Kyoto, although a number the buildings with historilrical value have been decreasing in recent years, many buildings and historical properties have been preserved and protected recently.

The feeling among local people recently has been to preserved as much of the historical flavor of the town as possible, rejecting slick new architecture in favor of the old and traditional.

Sanjo Street is unique in that you can observe the evolution of traditional Kyoto architecture while walking along just the short section of the street. A short stroll on this street on a beautiful sunny day is a walk through history.